Day 3. Were we Christo in motion?

By Sunday, we had ridden in open-sky country for two days and my vantage still felt fresh. We'd biked by skull- and antler-covered trees and horn-covered barns. I caught myself as we were riding, on the lookout for a sod house homestead. The concept popped into my head as part of the time-travel media information lodged in my head. Following this Mr. Wizard approach to time logic, I admit that, as a child, I was sure my parents had grown up alongside Laura Ingalls Wilder, good neighbors in pioneer times, each with their own Little House on the Prairie, probably living near one other on the banks of the Plum Creek, in Montana, this place of sprawling, wild earth.

My dreamy morning thoughts before breakfast turned to helping the rest of the team with logistics and setting up the flags, cameras, and our bikes. We prepared to start drawing Day 3 at the Charles Waters campground near the Bitterroot trail where we spent our first night under the stars, next to a roaring creek. As I fiddled with the flag for my bike, a man, probably around my age, 54, asked what we were up to. Before I could respond, he told me he just sold his house in Bakersfield, California, and didn’t know what he was doing next. He said,

“Tell me about the flags. They kinda remind me of Christo.”

I thought about the correlation and it made sense. He was right on. He had lived near where Christo had erected the orange umbrellas along Highway 5.

And also Christo’s Running Fence, or to The Gates, in Central Park. The marking of space, the delineation of a landscape, the enormity of logistics. Instead of a fence or line of umbrellas, we were the line being drawn through air, recorded in time and space. Thank you, camper friend.

Today, we biked through tiny towns that hugged the highway, which runs parallel to the paved trail, through the Bitterroot Valley. We passed many outlets of the SFE store franchise... SFE: "Something For Everyone," with a giant AK-47 silhouette hung over the entrance and painted letters in all caps on the store walls...GUNS AND AMMO! GLOCKS!

I have done my due diligence. I can keep up with my teammates on my no-name bike. I am relieved. The miles I rode all spring training in frightened anticipation have paid off so far, as we ease into the third day of Drawing Ride 2. 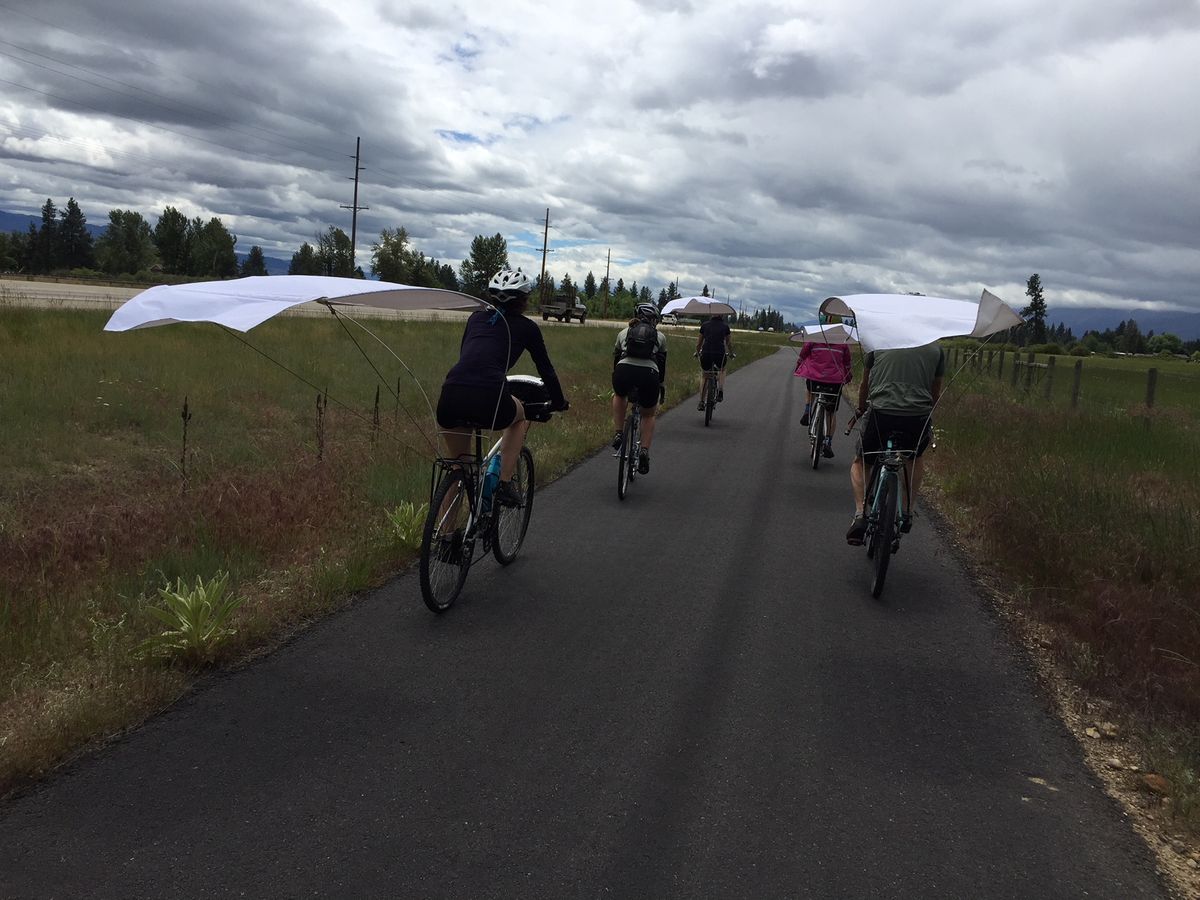 At the end of the day, wWe pulled into the Angler’s Roost, an RV Park, (a for sale sign near the entrance) after a day of riding. Our campsite was squeezed between a river and a road. Showers for a dollar...yippee! and firewood for five. A biker who passed us during the day ended up camping with us, telling stories of his adventures. He was a German climber, traveling by bike from one climbing area to another. His observations of Americans made me laugh. 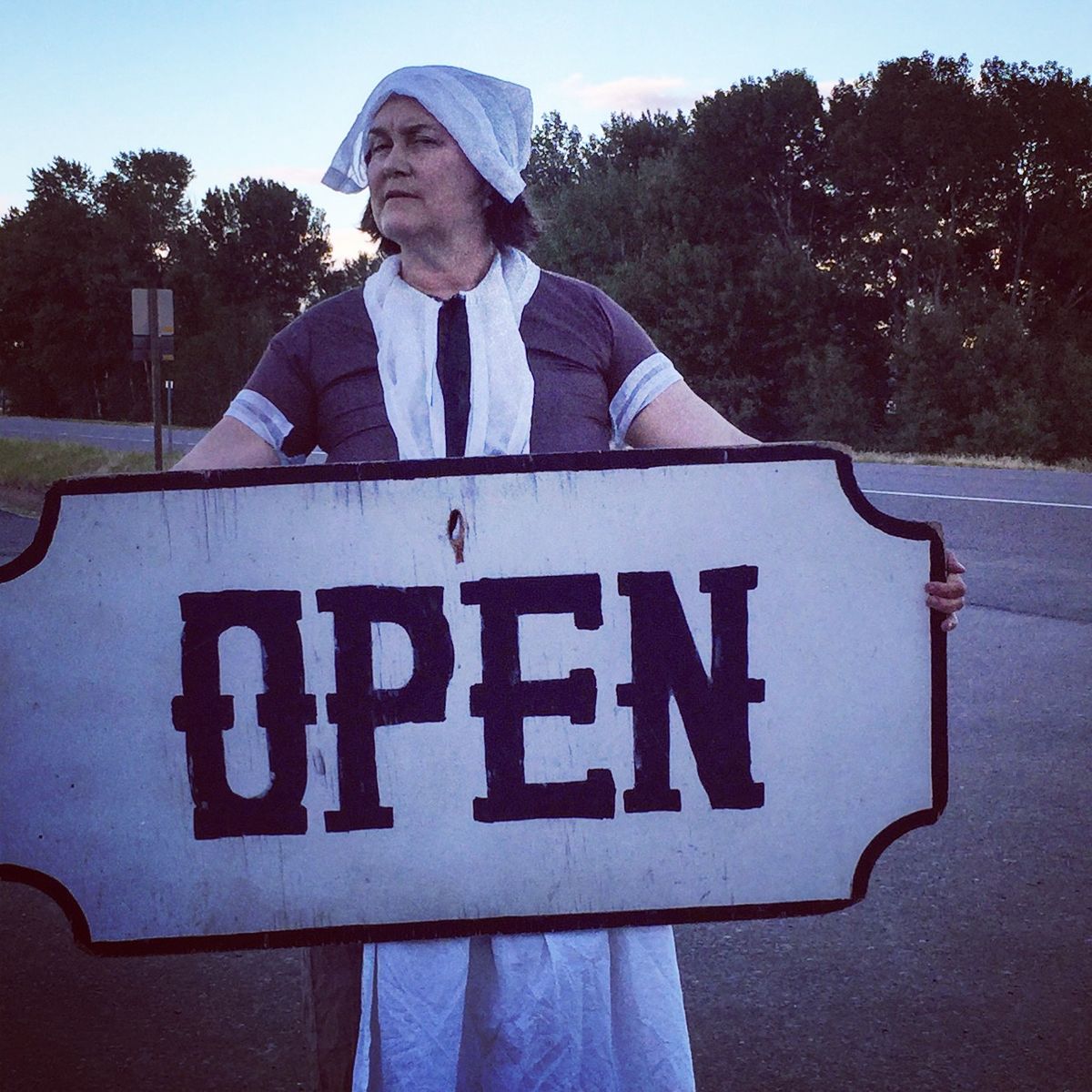 Maya helped me get some Pilgrim shots in... For though I am a proud flag-flying team member of 4 1/2 ft, I am also a pilgrim. The Pilgrim is a persona that began with the Hudson Valley BRAWL project, a sometime series of arm-wrestling events which is part of a national group of women arm-wrestlers in costume, that then took on a performative life of its own. Maya, Lisa’s sister, who besides being our trail leader, stepped quite naturally into the role Pilgrim location scout and photographer. She spots the opportunities for the Pilgrim to shine in all her fucked-up malapropist ridiculousness. 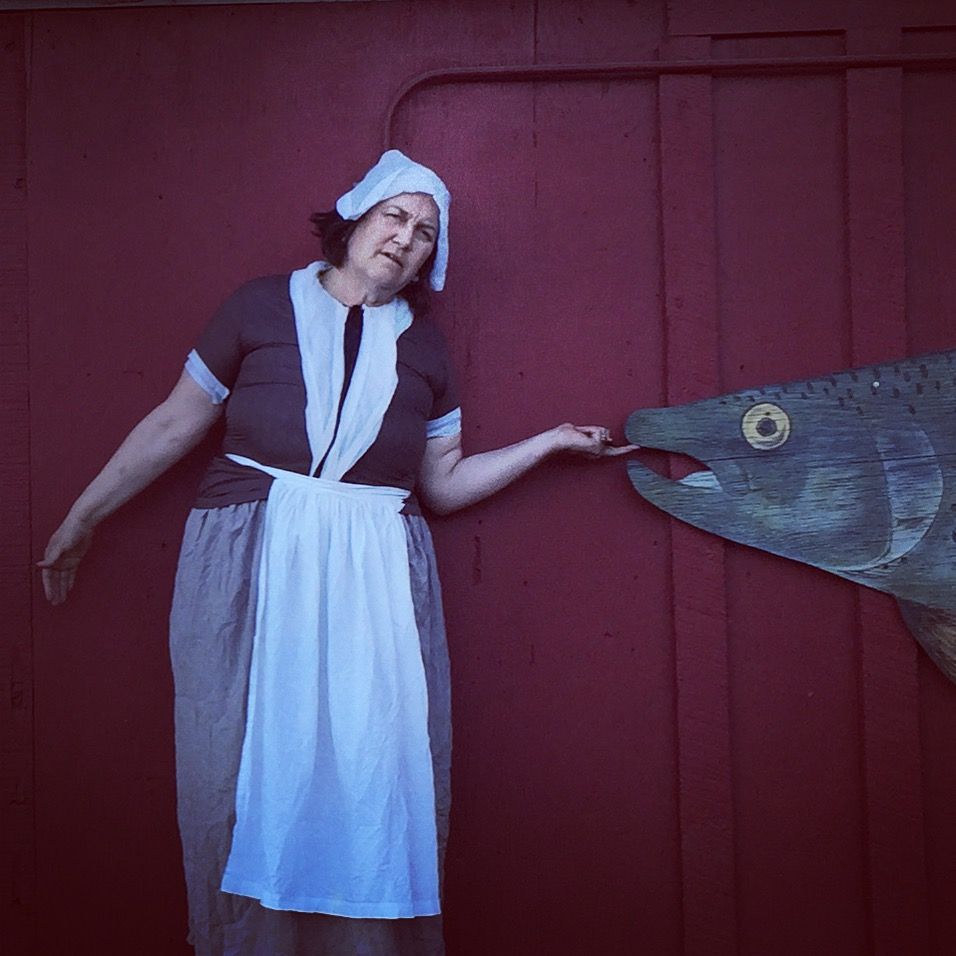