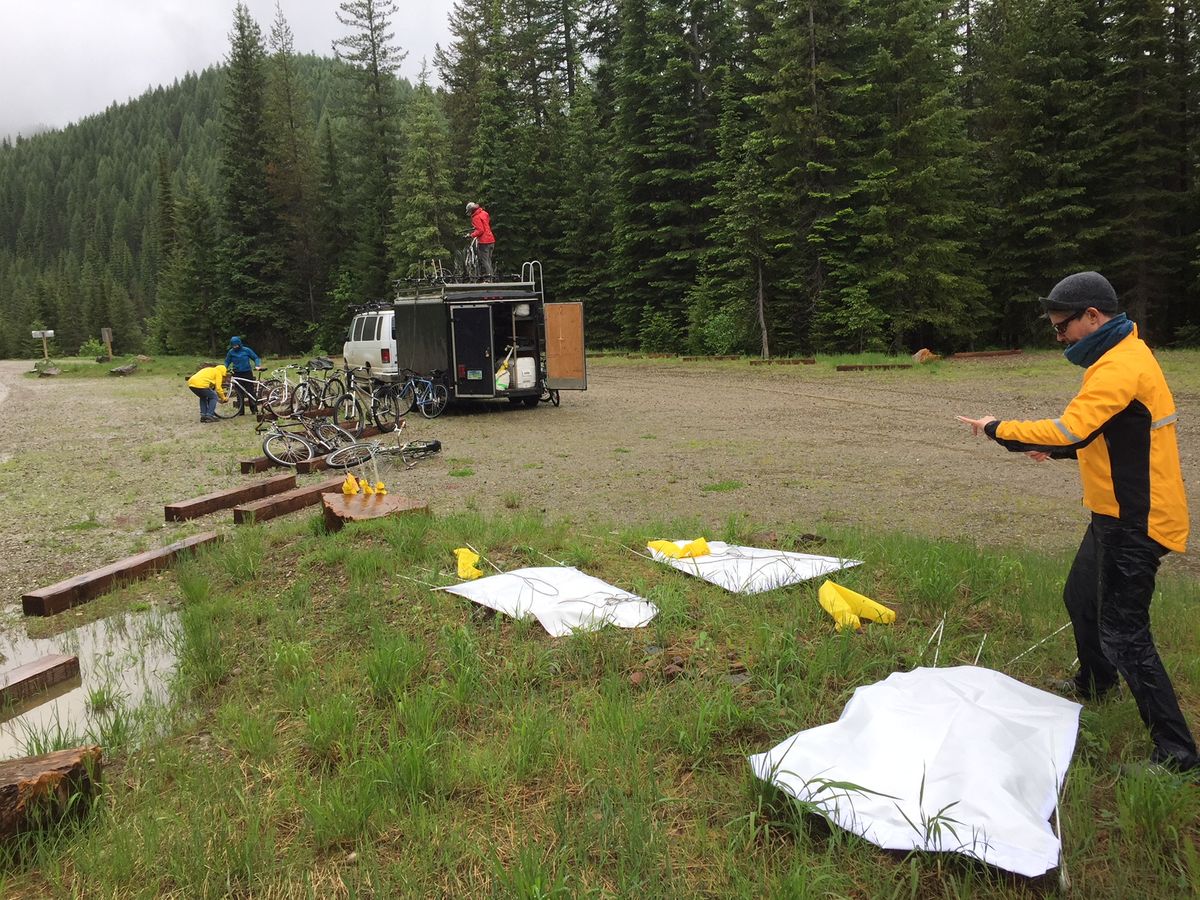 Day 1. A Baptism of Freezing Rain

Actual: Started riding in the afternoon after 3pm, arrived at airbnb evening)

DAY 1. Montana, big sky state! We flew along in a packed van hauling a trailer, rattling along cliffs, high above ravines. Coeur d'Alene Lake beckoned to us from below. A large sprawl of water, evergreen trees, cabins, second homes and bike lanes. I had a flash of being here before… camping by the lake, riding to the Mission where we lunched, marshes where we spied a moose mom and her two big babies, all munching nonchalantly, me stealthily taking pictures, out of my mind excited (on the inside!). Seeing the moose and riding the Coeur d'Alene was part of Drawing Ride 1, three years ago.

We drive by signs for the town of Wallace where we stayed in a bike house with posters of bikers from the Tour De France, grimy, sinewy, wearing sashes made of multiple inner tubes like contestants in a pageant, standing dirty and proud. Wallace, where we poured over maps and prepared for the Drawing Ride 1 finale, along the Route of the Hiawatha, originally part of the Pacific extension of the Milwaukee Railroad through the Rockies, known for the long, dark St. Paul Pass or "Taft" Tunnel which burrows for 1.66 miles under the state line. Three years ago, we strapped on our flags, as second nature as brushing our teeth, and rode over 17 or more Trestles, all downhill -- a theme park for biking, perfect for families, complete with a schoolbus to bring riders back up to the parking lot. It was idyllic, nothing but a thing...

Our van climbed back to the Route of the Hiawatha parking lot for Day 1’s ride: the Route of the Olympian, another rail-trail starting from the same location but heading east. The 31-mile long rail-trail is one of several rail-trails occupying the abandoned Pacific route of the Milwaukee Road, which originally connected the railroad's Wisconsin hub with Washington state.

This is where Drawing Ride 2 began and where we kicked off the next 400+ miles. Upon our arrival, we found the entrance sign for the Route of the Olympian; dark clouds hung close and then opened wide. The rain dumped a baptism of freezing sleet upon us on our first day.

We persevered, assembling our bikes for the inaugural ride, all layers of insulation saturated within minutes. We struggled to assemble our flags, while the rain kept coming.

But once Cori, Dee, and Bob sorted it all out and we started riding, the rain, the spraying mud, the cold, none of it mattered. After three years of planning and fund-raising and map- making, we were on our bikes. We were biking! All our preparations had led to this moment.

This moment of movement through mud, and trail gates, and trestles and encores of downpours, all to be outdone by rolling through the magic of a two-mile tunnel. Two miles of seeing lights bob off curved walls, hearing dripping and singing echoed, reflections of an eerie darkness, and otherworldly movement culminating in popping out onto a sun-covered trestle.

Each old railroad trestle on this particular route had been reimagined from its utilitarian origins to fancy bike bridges, lovingly crafted with wooden diagonal slat sides, a gravel-covered steel thoroughfare with wire guard rails, for maximum views of lush pine forests and a river a hundred feet below, clear as day.

Ginny and the SAG wagon met us at the other end of 15 miles; the rainstorm surged again, and we called it. We disembarked, broke flags down, lashed bikes on top and climbed into the van to avoid yet another deluge, which pelted the caravan as Ginny drove to our lodgings. As she drove, the rest of us stripped off soggy, clay-covered clothes and pulled on warmies, onward to our first night of this leg.

We drove toward Missoula, through rolling green meadows, juxtaposed with clear-cut patches, and evergreens in formation, second- and third- growth lining up to the ridge of the mountains that hugged the highway as we careened along. Nine bikes lashed on top of the van with a trailer of provisions, tents, suitcases, cook stove, and camp chairs weaving behind us. I kept thinking we were in Montana, Frank Zappa included; my brain a broken record replaying stories of what might lurk in this gorgeous, feral world outside our van windows... militias, gun warehouses, red-state wonders and hide-out of Ted Kaczynski. My gerbil-wheel brain's media spew focused on Montana and went into hyperdrive. Bright green valleys out the window, identical to the heartbreaking Brokeback Mountain’s early scenes of high meadows. The sweet play of two cowboys and their ramshackle trailer.

The rain stopped. Onward we drove to see tiny houses alongside the highway, a semblance of small-town communities. We descended into the “low country” approaching Missoula.

Here we are, Montana. We are trying to inhale what you are, beyond what the media hath wrought. My brain dislodges more crap: Demi Moore lived out here somewhere. Abortion Clinics shut down. And then, actual billboards appeared, announcing Axman Firearms, Ak-47's and Glock's For Sale! Ginny, our driver and guide, reminded us that here in Montana, it’s open carry, i.e., people carry guns openly in holsters. Big sky country, folks! Welcome to Montana. Where’s that yellow snow? We’re going to Montana now.

Once in the outskirts of Missoula, Ginny started looking for where we would sleep that night. She followed GPS, highway signs, and six backseat drivers giving opinions. She pulled off the highway at the crossroads of a dusty second-hand store and a side road. We drove into a subdivision and then towards the east and a mountain range. The dirt road opened up to fields, more fields, forever skies and signs promising pony rides. Horse trailers everywhere. The GPS coaxed us onward to a three-house farm where we unloaded, made dinner, found beds and took turns using the washing machine to wash our muddy clothes.